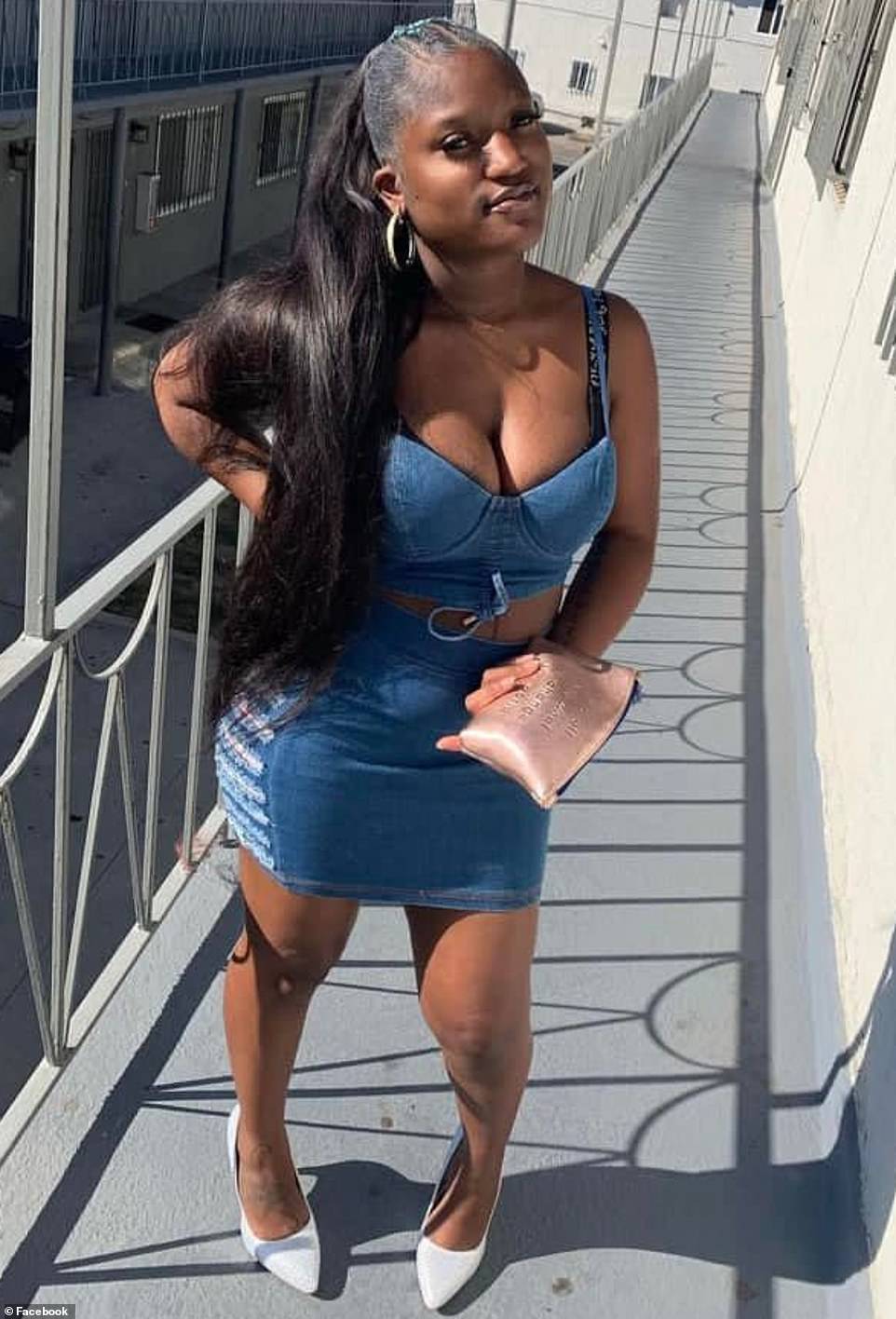 This is the first picture of a pregnant woman and her baby boy who were killed along with four others in a fiery crash at an intersection after a ‘drunk’ speeding driver slammed into five cars.

Eight-month pregnant Asherey Ryan, 23, was pronounced dead at the scene alongside her one-year-old child Alonzo Luchiano Quintero and her unborn baby boy after Nicole L. Linton, 37, rammed her car through a red light at 80mph in Windsor Hills, Los Angeles.

The unborn child’s father Renald was also killed in the crash after the car split in half immediately on impact, those close to the family confirmed.

Asherey, Renald, and little Alonzo were on their way to a doctors appointment for a pregnancy check-up on when the ‘drunk’ driver smashed into the car they were travelling in.

The driver, Nicole L. Linton, was arrested and for vehicular manslaughter – and is expected to be formally charged by Los Angeles County district attorney on Monday, according to the LA Times.

She is a nurse from Texas, who was working in the LA area. She is co-operating with investigators checking her bloodwork to see if she was under the influence when the fatal collision took place.

Linton will be booked after she’s released from hospital.

Vehicles were sent screeching across the street, bursting into flames, before finally coming to a stop in a mangled wreck just feet away from rows of highly flammable pumps.

A woman has claimed that speeding driver Linton, who was her friend, was ‘drunk’ and ‘fighting with her boyfriend’ before she got in her car and smashed into a traffic jam.

PICTURED: Asherey Ryan, 23, died in the fiery crash with her one-year-old child and her unborn child. Tributes have poured in for the mother, who was expecting another child this year 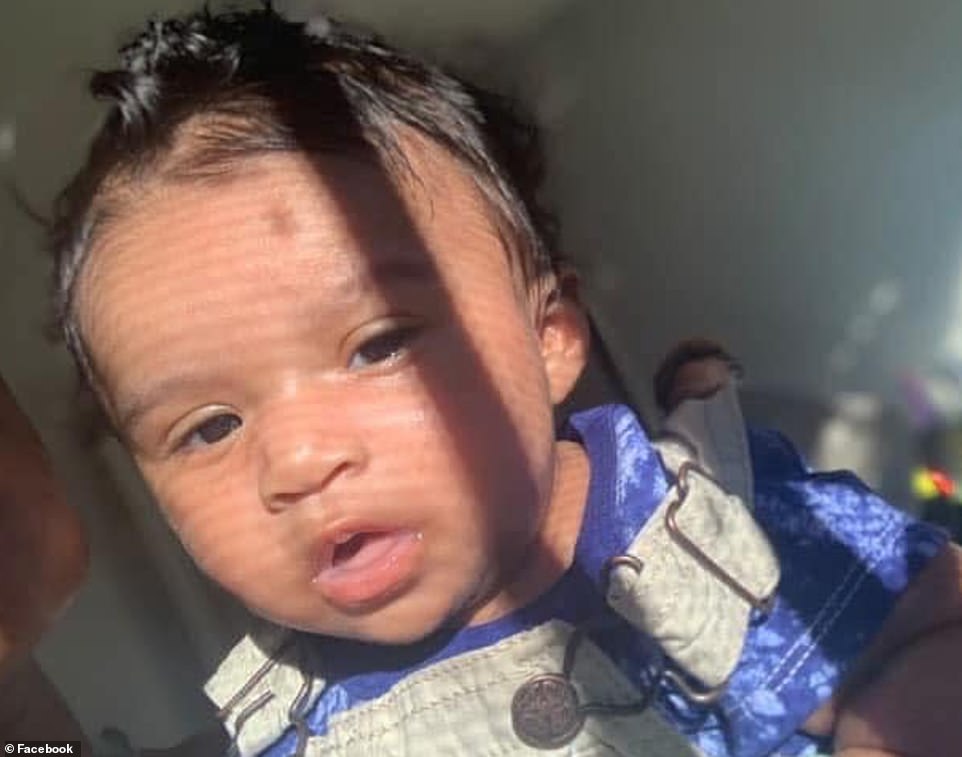 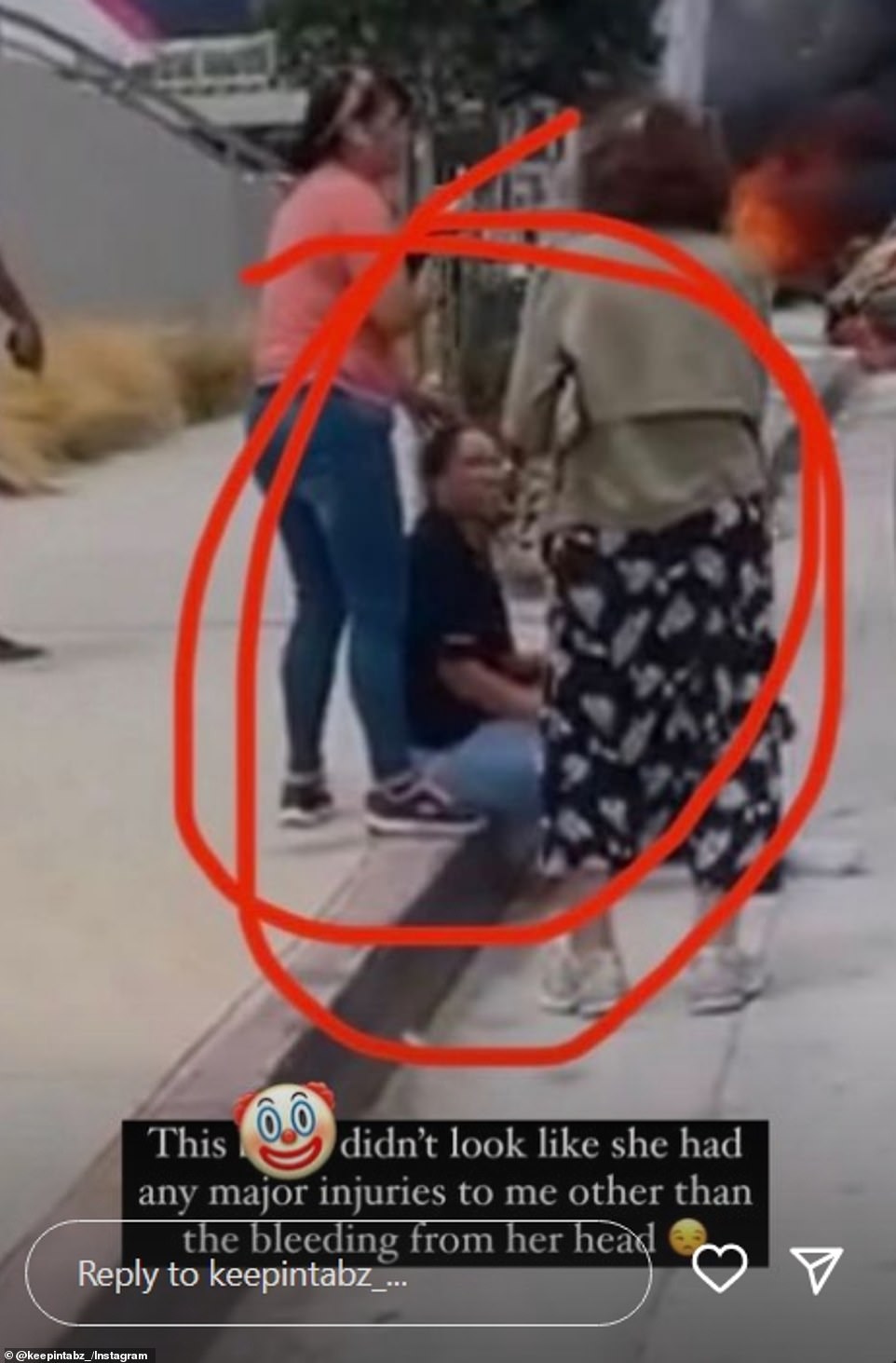 Tabia Johnson, a witness to the crash, took a photo of the suspect, Nicole L. Linton (center), commenting that Linton only appeared to suffer minor injuries in the horrible crash 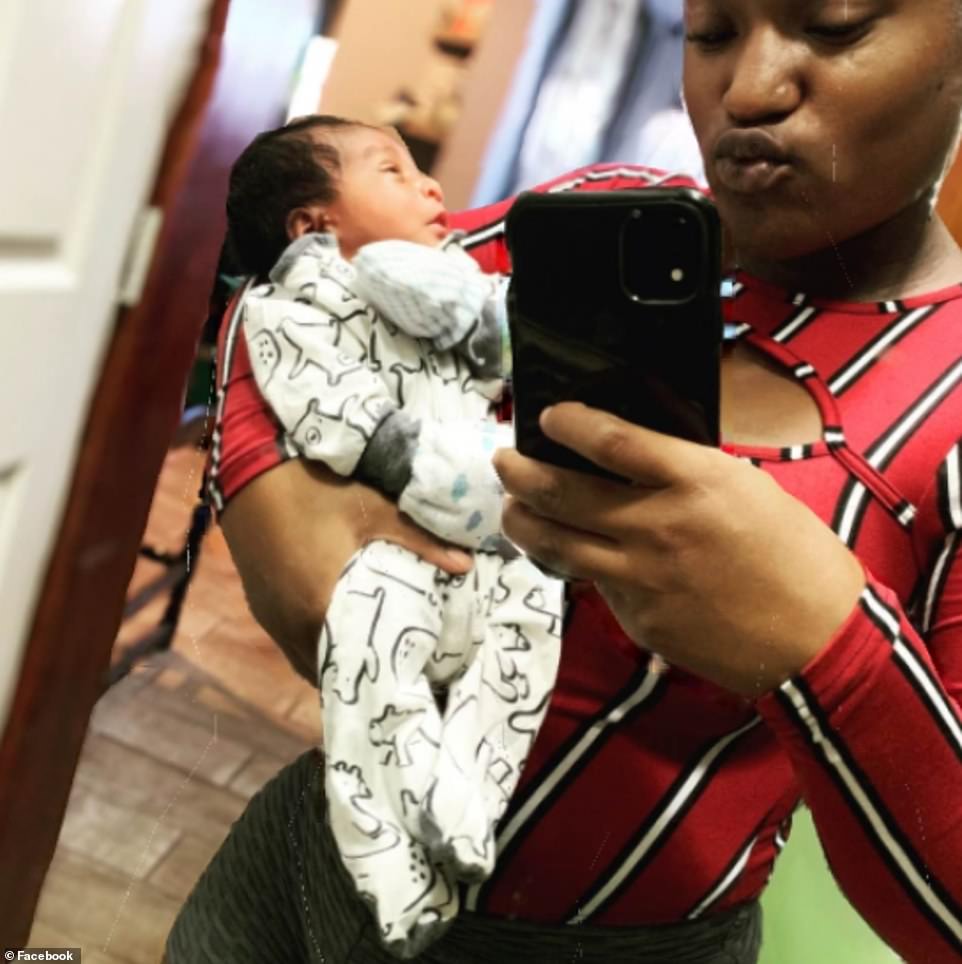 Tributes poured in for the mother after she was tragically killed in the violent collision. Her one-year old Alonzo was also pronounced dead at the scene 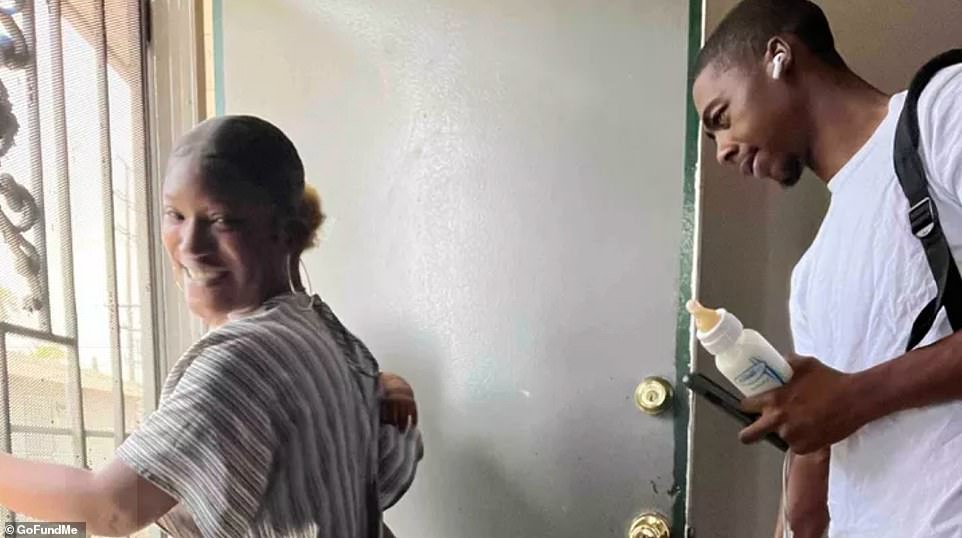 The father of the unborn child Renald (right) also died in the deadly crash. He is pictured with Asherey 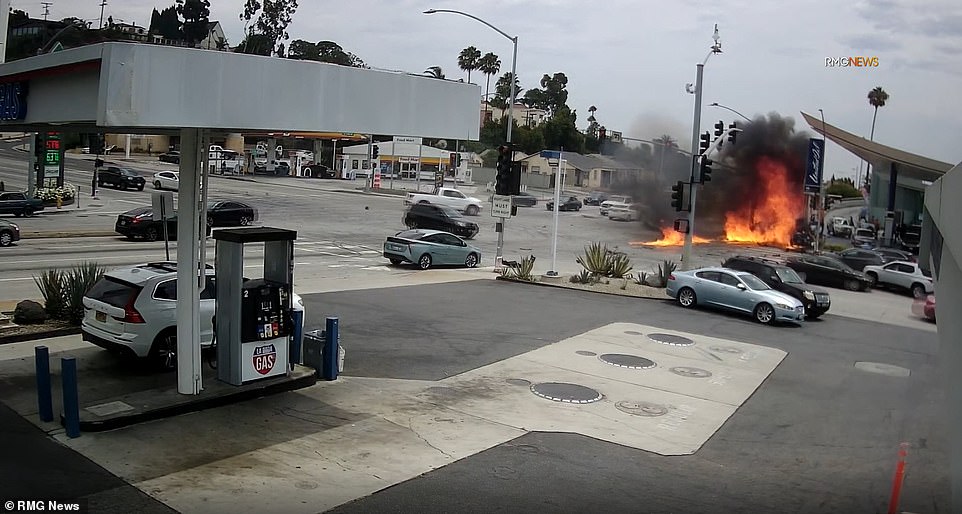 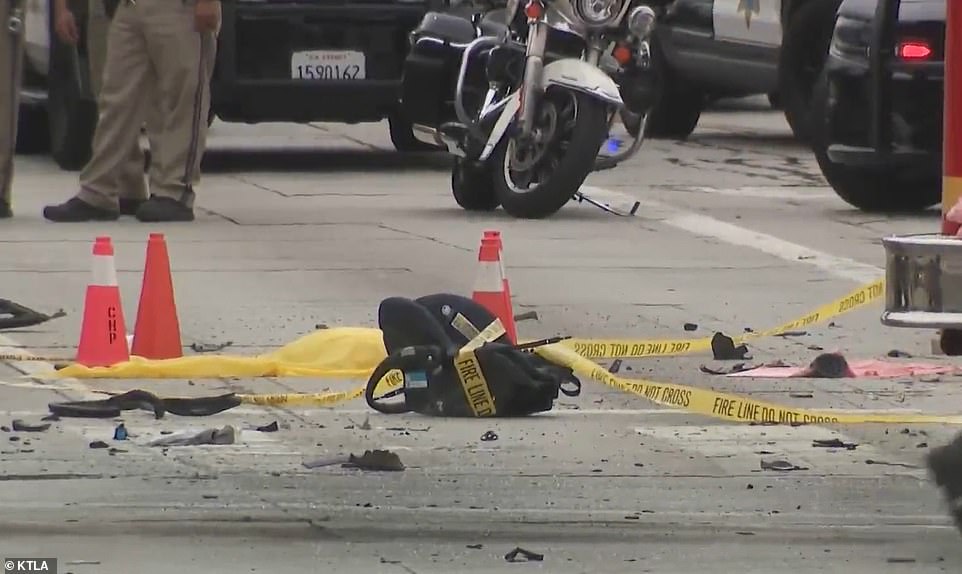 A child’s car seat was seen ejected from a vehicle on the crash site. It was confirmed that a baby died in the horrific ordeal 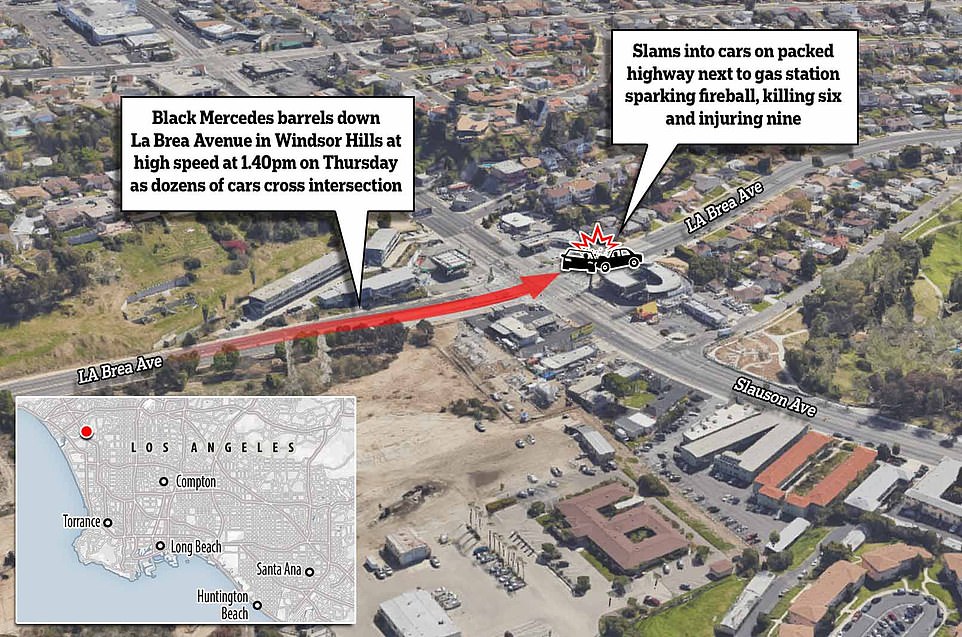 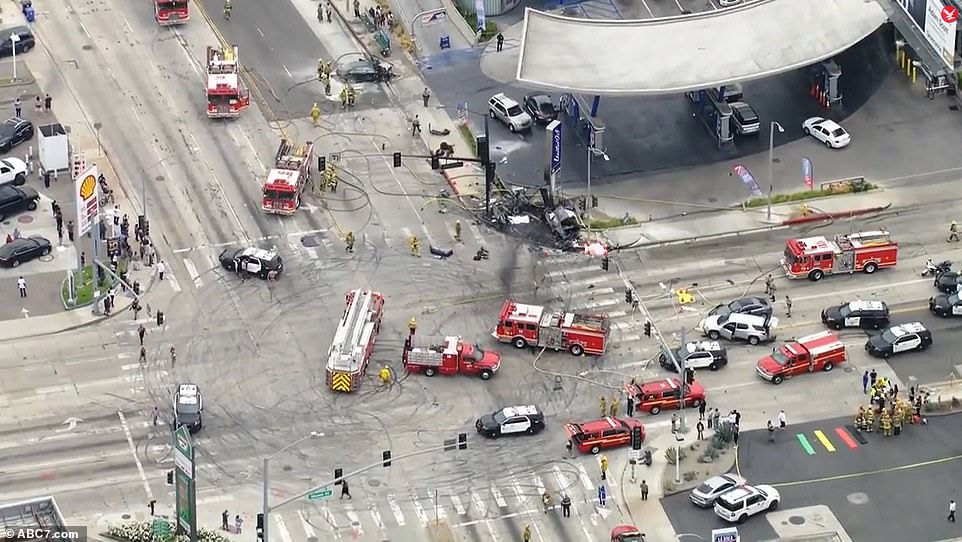 Eight people have been left fighting for their lives with horrendous injuries following the devastating smash at 1:40 p.m. Of those injured, six were teens and one suffered major injuries. The driver is one of those with injuries in hospital.

Tributes have poured in for Asherey, who is believed to have been eight months pregnant, and her child after the devastating collision.

Alonzo’s father Luis Fernando Quintero wrote online: ‘I don’t have any words rn [right now] I’m too much in pain because this is something I never expected no one did I’m going to miss you both and I didn’t get to say goodbye or make up for time lost with you Alonzo my heart is aching may y’all rest in piece god has gained two amazing angels.’

The family have created a GoFundMe to help with funeral costs following the horrific ordeal.

Witness Veronica Esquival said that she was pumping gas when debris suddenly started flying through the air during the horrific smash – caused by the female driver, who was alone in the car. 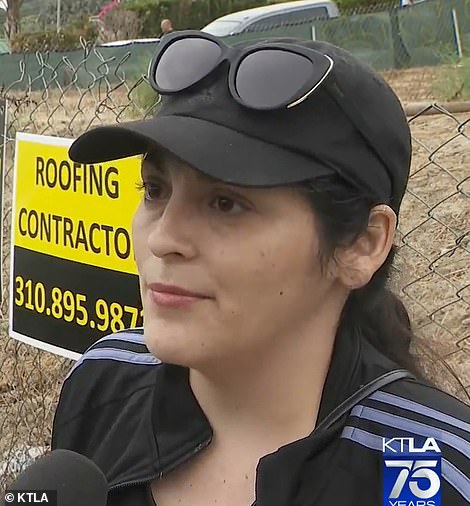 Witness Veronica Esquival said that the baby landed at her feet after the deadly smash. She was pumping gas at the station when the tragedy happened

She said that a baby tragically landed on the floor in the middle of the gas station before panicked workers tried to resuscitate the child.

She said: ‘I was about to pump gas and all of a sudden, I hear all of the noises from all of the collisions, and then the fire explosion and I saw things, metal and things flying in the air. So, I just covered myself behind the pump.

‘One of the workers came and saw me with the baby and took the baby out of my hands. Somebody tried to resuscitate the baby, but the baby was gone.’

One woman, who claims to be a friend of the Mercedes driver, said she believed she had been drinking after having an argument with her boyfriend before the deadly crash.

Linton was alone in the car, officials confirmed.

She told KTLA: ‘She was drinking and she was not aware that it was a red light because she shot straight through.’

Another heartbroken witness Alphonso Word, who was just a few cars away from the intersection when the tragedy struck, said that the crash sounded ‘like a bomb.’

He said that the child was ‘ejected from the street’ as was the the pregnant mother, who ‘landed over to the side.’

Devastating images show vehicles left burnt out after firefighters doused the huge flames caused by the crash – after an inferno made it look like ‘the whole intersection was on fire.’ 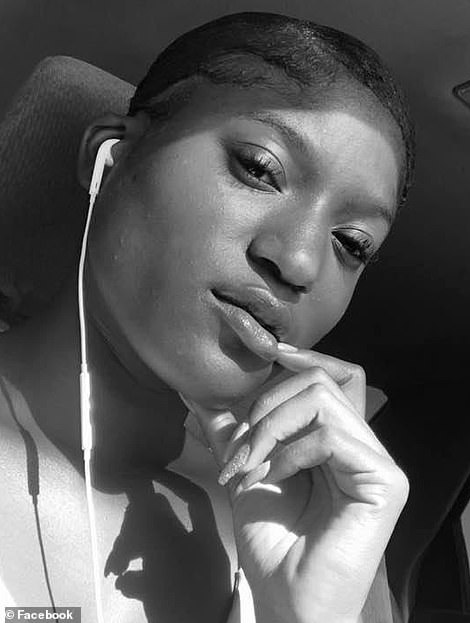 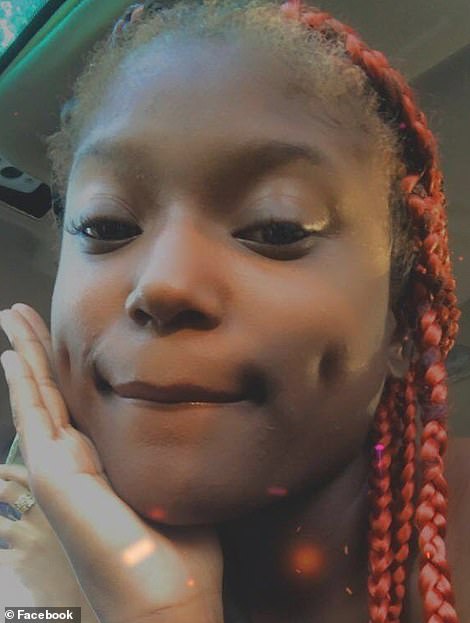 The gut-wrenching fatal pile up happened between South La Brea Avenue and Slauson Avenue on Thursday afternoon. Asherey Ryan (pictured) was one of the victims 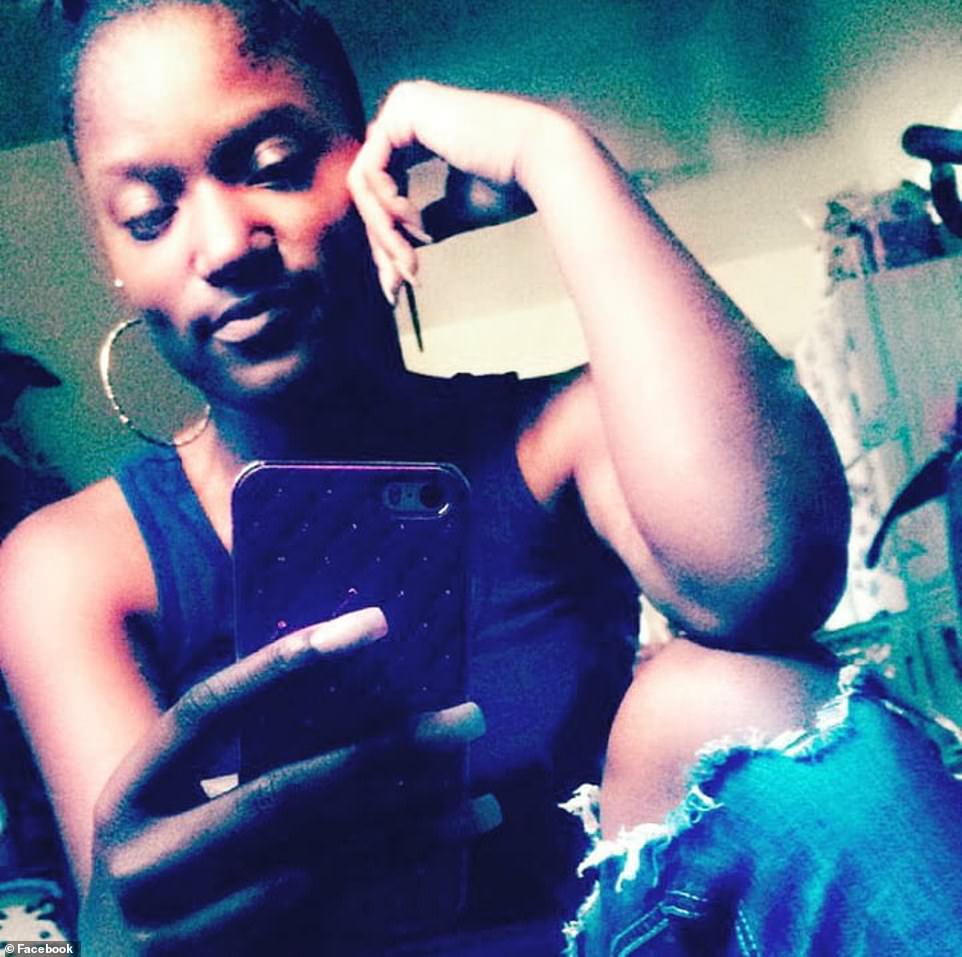 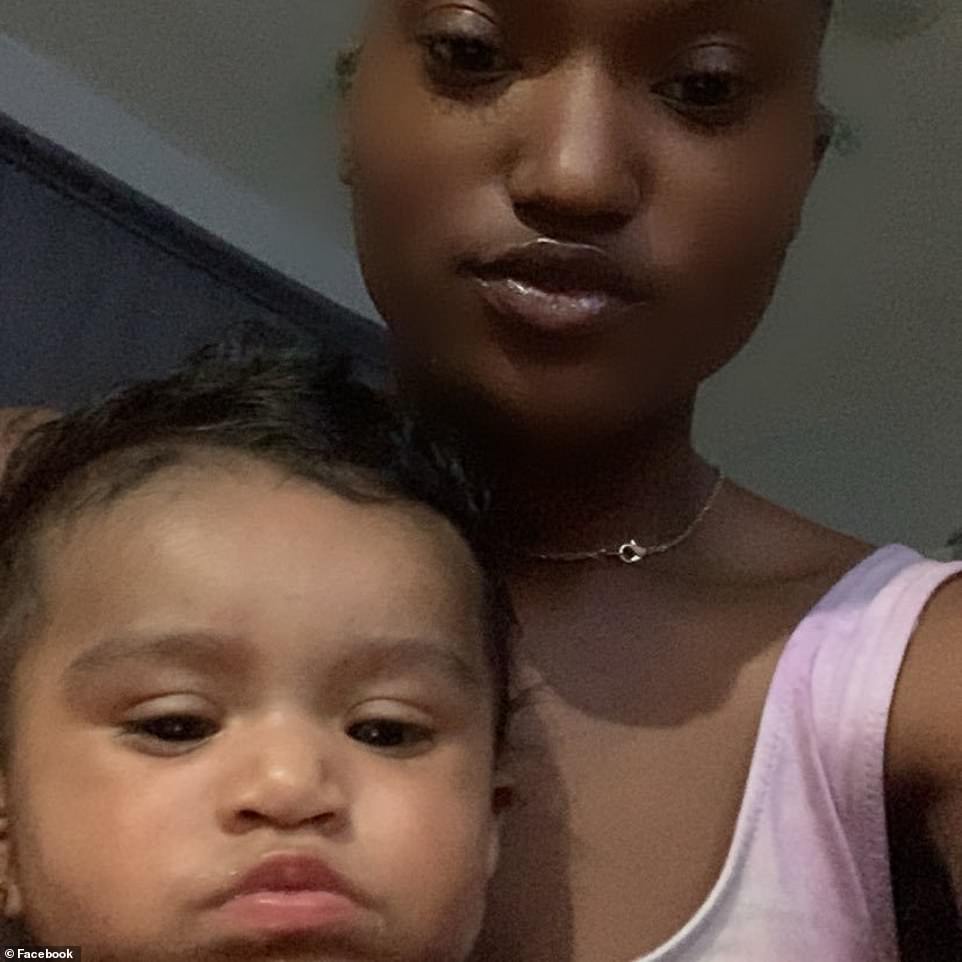 The mother and Alonzo (pictured) were two of the victims in the car crash. The driver, 37-year-old Linton thought to be a nurse, has been arrested after the collision 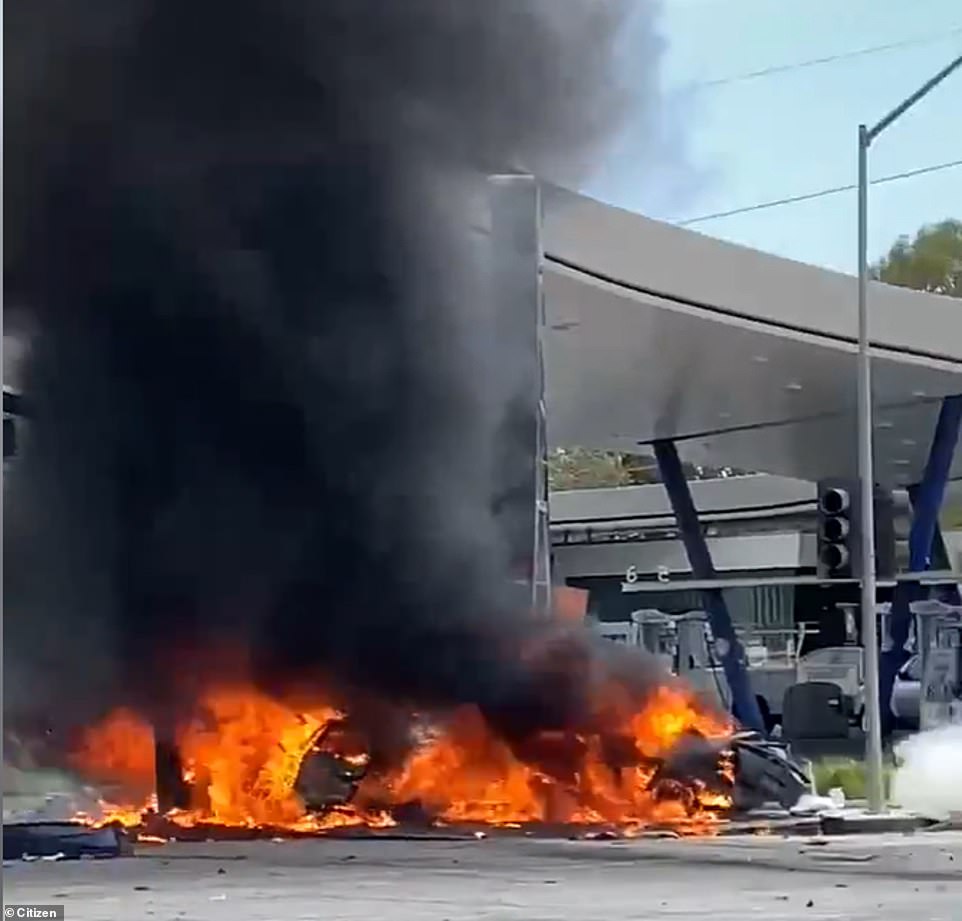 The Mercedes races past a gas station then smashes into the side of a traffic jam, causing a flaming inferno in the Windsor Hills district 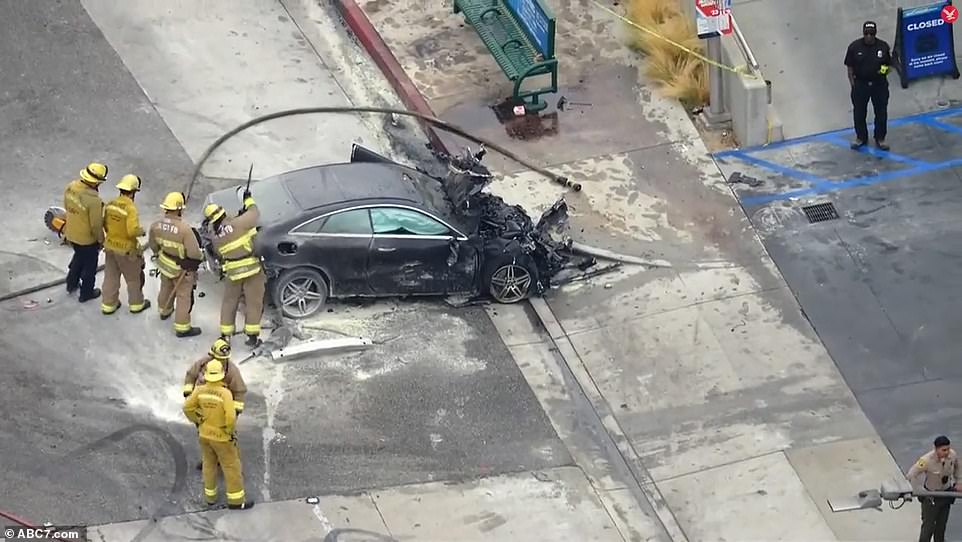 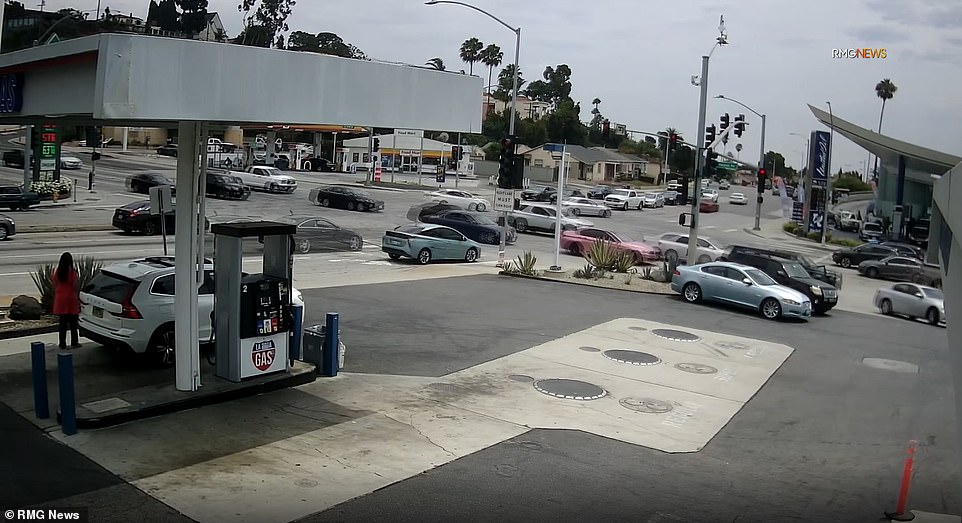 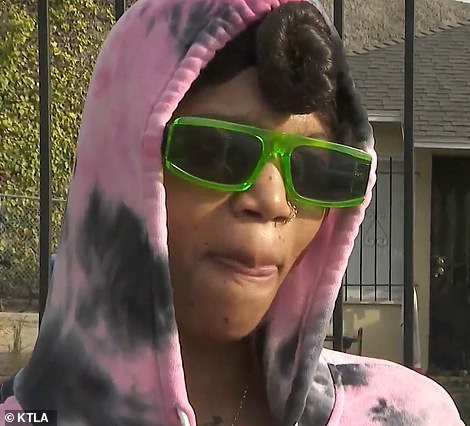 One woman claimed that the driver was her friend, and that she had been drinking after fighting with her boyfriend prior to the deadly crash

Another witness Alphonso Word said that the crash sounded ‘like a bomb.’

Devastating images show vehicles left burnt out after firefighters doused the huge flames caused by the crash – after an inferno made it look like ‘the whole intersection was on fire.’

The shocking footage, taken from a gas station overlooking the scene, starts as the Mercedes coupe races past the pumps at blistering pace.

The doomed vehicle fails to break as it bears down on the traffic flowing both ways across the packed intersection.

It slams into the first car, which immediately bursts into a sickening fireball before plowing through several others that spin from the huge impact. The crash sends them all hurtling towards another gas station across the intersection before finally coming to a stop in a crumpled mess.

The pile up came to a stop just before the second gas station over the road, which is considered an architectural icon. 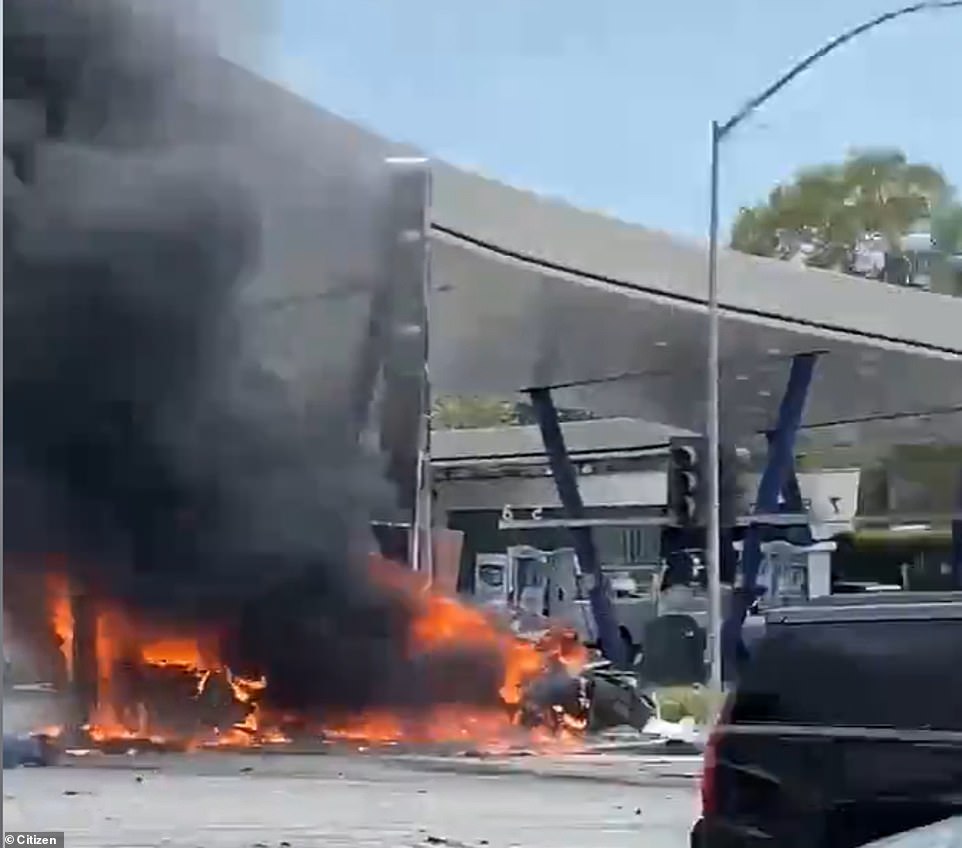 The gut-wrenching pile up, between South La Brea Avenue and Slauson Avenue, killed the pregnant woman, her unborn child and the one-year-old 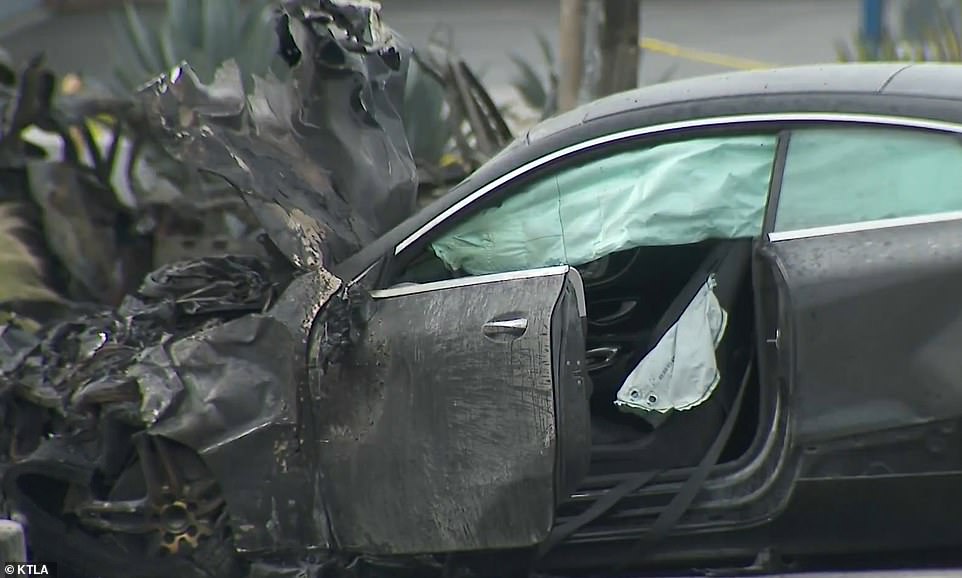 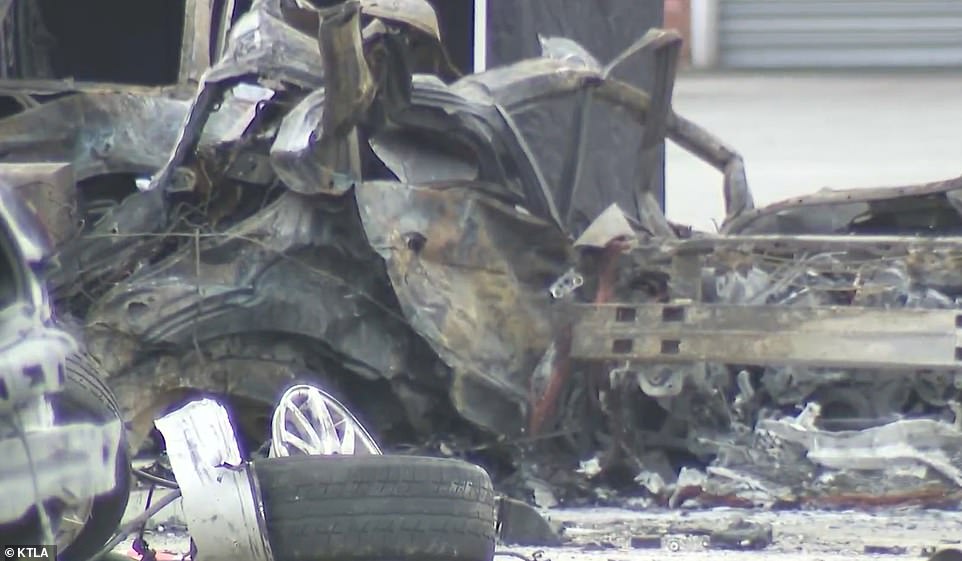 Images show mangled, burnt out vehicles splattered across the street in what was described by California Highway Patrol as looking ‘like a war zone.’

Eight of the nine injured were sent to area hospitals and six of the nine are children and teens. The driver of the Mercedes is believed to be one of the people sent to the hospital with major injuries.

Debra Jackson, who was filling her car with gas, told CBSLA: ‘All of a sudden, I heard a big explosion and flames went over my whole car. I though my car was on fire.’

California Highway Patrol spokesman Franco Pepi said that ‘at least six or seven’ vehicles were involved – and three became engulfed in flames. He also confirmed that the driver was a 37-year-old woman.

He added: ‘Just unknown reasons for the high speed at this time … Everyone needs to drive with more due regard because a lot of collisions happen, and this just happens to be at the top of the list of how bad they can get.’ 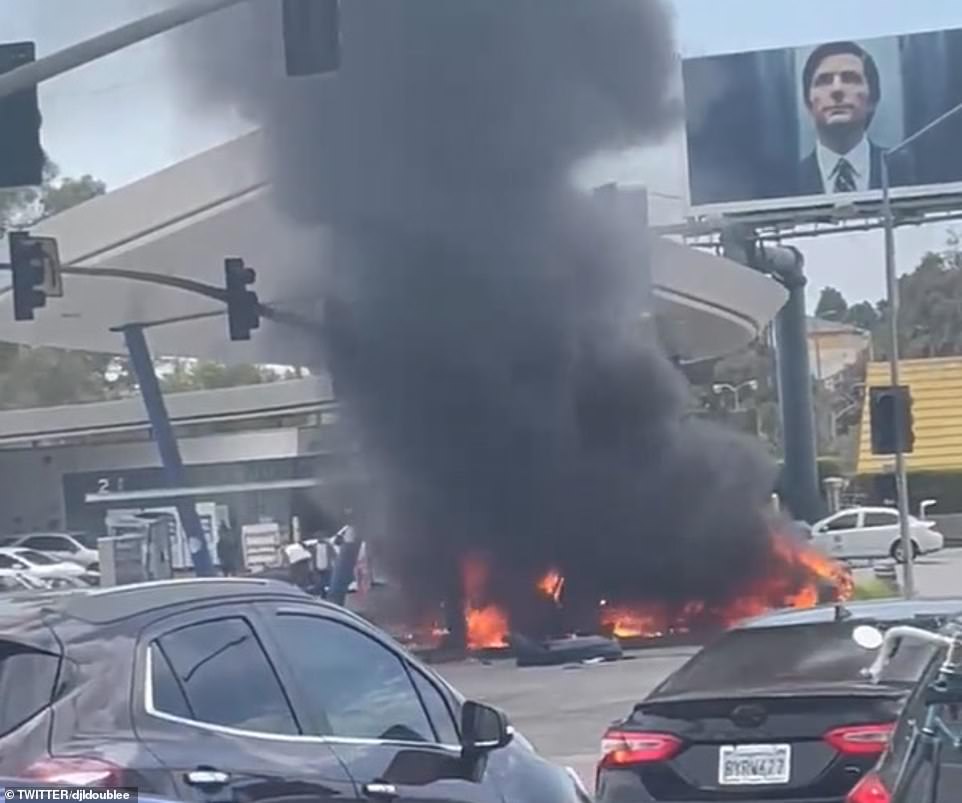 The shocking footage, taken from a gas station overlooking the scene, starts as the Mercedes coupe races past the pumps at blistering pace 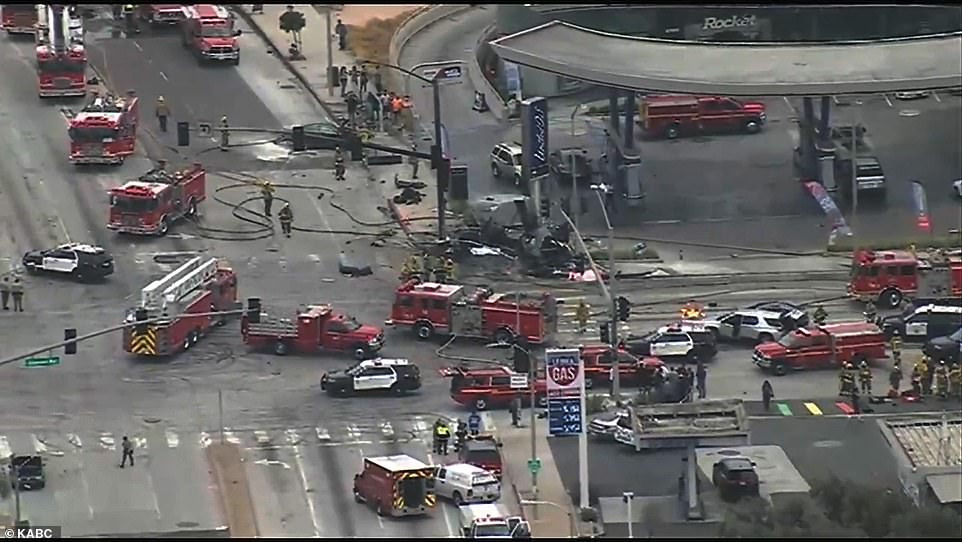 Meanwhile eight people have been left fighting for their lives with horrendous injuries following the devastating smash at 1:40 p.m.